O Faithful, let us sing a hymn of praise and worship to the Logos, coeternal with the Father and the Spirit, who was born of the Virgin for our salvation. Of His own will He went upon the Cross in the flesh and suffered death, to raise the dead through His glorious Resurrection.

Apolytikion for Proodos of the Holy Cross in the First Mode

Lord, save Your people and bless Your inheritance, granting our rulers to prevail over adversaries, and protecting Your commonwealth by Your Cross.

Seasonal Kontakion in the Grave Mode

You were transfigured upon the mount, O Christ our God, and Your disciples, in so far as they could bear, beheld Your glory. Thus, when they see You crucified, they may understand Your voluntary passion, and proclaim to the world that You are truly the effulgence of the Father.
BACK TO TOP

Sixth Orthros Gospel
The Reading is from Luke 24:36-53

At that time, Jesus, having risen from the dead, stood in the midst of his disciples and said to them, "Peace to you." But they were startled and frightened, and supposed that they saw a spirit. And he said to them, "Why are you troubled, and why do questionings rise in your hearts? See my hands and feet, that it is I myself; handle me, and see; for a spirit has not flesh and bones as you see that I have." And when he said this, he showed them his hands and his feet. And while they still disbelieved for joy, and wondered, he said to them, "Have you anything here to eat?" They gave him a piece of broiled fish, and he took it and ate before them.

Then he said to them, "These are my words which I spoke to you, while I was still with you, that everything written about me in the law of Moses and the prophets and the psalms must be fulfilled. Then he opened their minds to understand the scriptures, and said to them, "Thus it is written, that the Christ should suffer and on the third day rise from the dead, and that repentance and forgiveness of sins should be preached in his name to all nations, beginning from Jerusalem. You are witnesses of these things. And behold, I send the promise of my Father upon you; but stay in the city, until you are clothed with power from on high."

Then he led them out as far as Bethany, and lifting up his hands, he blessed them. While he blessed them, he parted from them, and was carried up into heaven. And they worshiped him, and they returned to Jerusalem with great joy, and were continually in the temple blessing God.

Prokeimenon. Plagal First Mode. Psalm 11.7,1.
You, O Lord, shall keep us and preserve us.
Verse: Save me, O Lord, for the godly man has failed.

Brethren, having gifts that differ according to the grace given to us, let us use them: if prophecy, in proportion to our faith; if service, in our serving; he who teaches, in his teaching; he who exhorts, in his exhortation; he who contributes, in liberality; he who gives aid, with zeal; he who does acts of mercy, with cheerfulness. Let love be genuine; hate what is evil, hold fast to what is good; love one another with brotherly affection; outdo one another in showing honor. Never flag in zeal, be aglow with the Spirit, serve the Lord. Rejoice in your hope, be patient in tribulation, be constant in prayer. Contribute to the needs of the saints, practice hospitality. Bless those who persecute you; bless and do not curse them.

6th Sunday of Matthew
The Reading is from Matthew 9:1-8

At that time, getting into a boat Jesus crossed over and came to his own city. And behold, they brought to him a paralytic, lying on his bed; and when Jesus saw their faith he said to the paralytic, "Take heart, my son; your sins are forgiven." And behold, some of the scribes said to themselves, "This man is blaspheming." But Jesus, knowing their thoughts, said, "Why do you think evil in your hearts? For which is easier, to say 'Your sins are forgiven,' or to say 'Rise and walk?' But that you may know that the Son of man has authority on earth to forgive sins" he then said to the paralytic -- "Rise, take up your bed and go home." And he rose and went home. When the crowds saw it, they were afraid, and they glorified God, who had given such authority to men.

Elesa the Righteous-Martyr of Kythira

Procession of the Precious Cross

Because of the many diseases that occur in the month of August, the custom prevailed of old in Constantinople to carry the precious Wood of the Cross in procession throughout the city for its sanctification and its deliverance from illnesses. It was brought forth from the imperial treasury on the last day of July and placed upon the Holy Table of the Great Church of the Holy Wisdom; and beginning today, until the Dormition of the Theotokos, it was carried in procession throughout the city and was set forth for veneration before the people.

Artoklasia offered today by Panagiotis and Despina Tzelepis for the well-being of their family.

NO COFFEE HOUR THIS SUNDAY

There will be NO Coffee hour today.

Our Philoptochos Membership Form is included in the insert section of the bulletin.

COOKBOOKS
Amaze your family and friends with your cooking skills! The Joy of Greek Cooking cookbooks are for sale once again! The book contains hundreds of authentic recipes from the kitchens of our parishioners. Price remains affordable at $20, or $24 which includes shipping. Porch pickup also available in Farmington Hills.

PLEASE KEEP MARIA GLIKIS AND MARY GAGGOS IN YOUR PRAYERS

You can send a card or call, I'm sure it will be greatly appreciated!

We are pleased to announce that you can now watch live streaming of the Annunciation Cathedral services, starting at 10:00 a.m. every Sunday.

Please call Fr. Georgios Manias or the Church Office to schedule and confirm in advance, Sacraments and special Liturgical services, such as Memorials and Trisagion in order to honor your beloved ones.

Meetings with Father Georgios Manias are by appointment only. Please schedule meetings through the church office or by contacting Father at 313-588-0829.  Thank you!

Any individual wishing to schedule an appointment for Confession with Fr. Georgios Manias may do so by contacting Father at 313-588-0829.

"As the Father has sent me, so I send you." John 20:21. Christian stewardship is a commitment to God through our time, talent, and treasure. Your 2021 Stewardship pledge card is available in the Narthex. Please take the time to complete your card and place it in the Stewardship box.

To contribute to our Cathedral electronically. You can either go to our website's home page and click on the "Donate" button with the following link:

Or, you can click on the following link to go directly to the "Donate" PayPal page:

You also still have the option of sending your donation by check directly to the Cathedral. In this tough economic time, we greatly appreciate any contribution towards your stewardship. 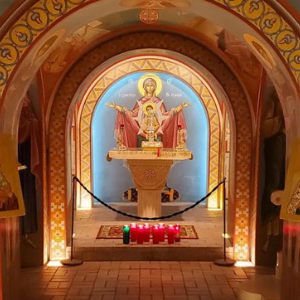 If you are in need of church supplies, consider purchasing these items from the St. Photios on-line store store! 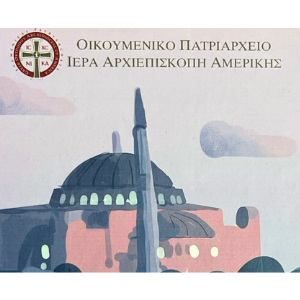 Homily for the Feastday of Saint Paraskevi the Great-Martyr 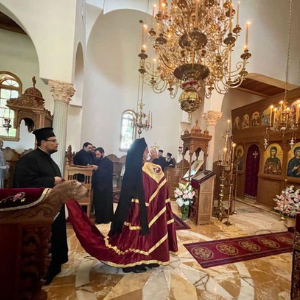 With great spiritual gladness, I rejoice to celebrate the Feastday of your Heavenly Protector and Advocate, the Holy and Righteous-Martyr, Paraskevi. Earlier in our prayers and praises, we read the following from her Kontakion: Τὸν ναόν σου πάνσεμνε, ὡς ἰατρεῖον ψυχικὸν εὑράμενοι… We find your Temple, O All-Pure One, to be a remedy of our souls… 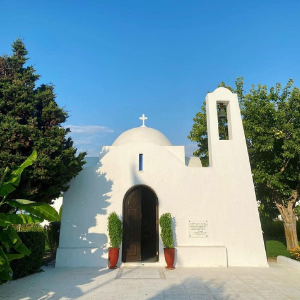 Ionian Village in Glyfa, Greece prepares to welcomes the arrival of its going adult program, #IVNext2021. 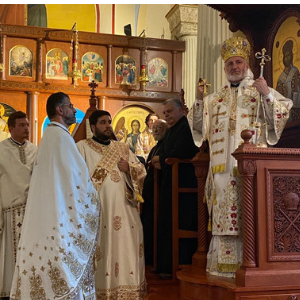 On Sunday, July 25 after the Archierarchical Divine Liturgy at Holy Trinity Greek Orthodox Cathedral in Salt Lake City, His Eminence Archbishop Elpidophoros of America bestowed upon the V. Rev. Archimandrite George Nikas the Pectoral Cross of the Greek Orthodox Archdiocese of America.

He puts an end to the woman's fear ... He sets her right, in respect of her thinking to be hid ... He exhibits her faith to all, so as to provoke the rest also to emulation ...
St. John Chrysostom
Homily 31 on Matthew 9, 4th Century