Gregory the Wonderworker & Bishop of Neo-Caesarea

Saint Gregory was born in Neocaesarea of Pontus to parents who were not Christians. He studied in Athens, in Alexandria, in Beirut, and finally for five years in Caesarea of Palestine under Origen, by whom he was also instructed in the Faith of Christ. Then, in the year 240, he became bishop of his own city, wherein he found only seventeen Christians. By the time the Saint reposed about the year 265, there were only seventeen unbelievers left there. Virtually the whole duration of his episcopacy was a time of continual, marvellous wonders worked by him. Because of this, he received the surname "Wonderworker"; even the enemies of the truth called him a second Moses (see Saint Basil the Great's On the Holy Spirit, ch. 29).

Gennadios I and Maximus, Patriarchs of Constantinople

Our righteous Mother Hilda was of noble birth, being a kinswoman of Saint Edwin, King of Northumbria (celebrated Oct. 12). At the age of thirty-three she renounced the world, and lived another thirty-three years as a nun and abbess. The last six years of her life she suffered a burning fever with patience and nobility, and reposed in peace in the year 680.

Let us the faithful give praise and worship to the Logos, coeternal with the Father and the Spirit, born of the Virgin for our salvation; for of His own goodwill he consented to ascend the cross in the flesh and endured death and raised the dead by His glorious resurrection.
Τὸν συνάναρχον Λόγον Πατρὶ καὶ Πνεύματι, τὸν ἐκ Παρθένου τεχθέντα εἰς σωτηρίαν ἡμῶν, ἀνυμνήσωμεν πιστοὶ καὶ προσκυνήσωμεν, ὅτι ηὐδόκησε σαρκί, ἀνελθεῖν ἐν τῷ σταυρῷ, καὶ θάνατον ὑπομεῖναι, καὶ ἐγεῖραι τοὺς τεθνεῶτας, ἐν τῇ ἐνδόξῳ Ἀναστάσει αὐτοῦ.

Apolytikion for Gregory the Wonderworker in the Plagal Fourth Mode

Seasonal Kontakion in the Fourth Mode

Eleventh Orthros Gospel
The Reading is from John 21:14-25

Prokeimenon. Plagal First Mode. Psalm 11.7,1.
You, O Lord, shall keep us and preserve us.
Verse: Save me, O Lord, for the godly man has failed.

Brethren, see with what large letters I am writing to you with my own hand. It is those who want to make a good showing in the flesh that would compel you to be circumcised, and only in order that they may not be persecuted for the cross of Christ. For even those who receive circumcision do not themselves keep the law, but they desire to have you circumcised that they may glory in your flesh. But far be it from me to glory except in the cross of our Lord Jesus Christ, by which the world has been crucified to me, and I to the world. For neither circumcision counts for anything, nor uncircumcision, but a new creation. Peace and mercy be upon all who walk by this rule, upon the Israel of God. Henceforth let no man trouble me; for I bear on my body the marks of Jesus. The grace of our Lord Jesus Christ be with your spirit, brethren. Amen.

The Lord said this parable: "The land of a rich man brought forth plentifully; and he thought to himself, 'What shall I do, for I have nowhere to store my crops?' And he said, 'I will do this: I will pull down my barns, and build larger ones; and there I will store all my grain and my goods. And I will say to my soul, 'Soul, you have ample goods laid up for many years; take your ease, eat, drink, be merry.' But God said to him, 'Fool! This night your soul is required of you; and the things you have prepared, whose will they be?' So is he who lays up treasure for himself, and is not rich toward God." As he said these things, he cried out: "He who has ears to hear, let him hear."

I cannot be silent about the story of Hesychius the Horebite. He passed his life in complete negligence, without paying the least attention to his soul. Then he became extremely ill, and for an hour he left his body.
St. John Climacus
Ladder of Divine Ascent. Step 6: On Remembrance of Death, 6th Century


And when he came to himself, he begged us all to leave him immediately. And he built up the door of his cell, and he stayed in it for twelve years without ever uttering a word to anyone, and without eating anything but bread and water.
St. John Climacus
Ladder of Divine Ascent. Step 6: On Remembrance of Death, 6th Century

Archbishop Elpidophoros Keynote Speaker at the Ecumenical Symposium: “Truth Does Not Fear Dialogue” 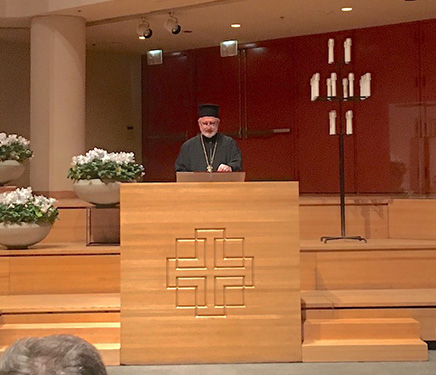 NEW YORK – On November 13, His Eminence Archbishop Elpidophoros offered the keynote address at an Ecumenical Symposium titled “Truth does not fear dialogue,” hosted by... 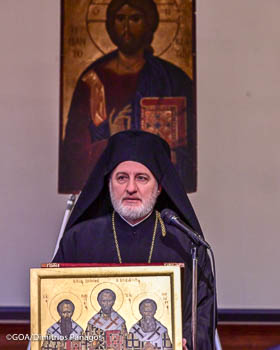