Sunday of the Publican and Pharisee: Triodion Begins Today

The Pharisees were an ancient and outstanding sect among the Jews known for their diligent observance of the outward matters of the Law. Although, according to the word of our Lord, they "did all their works to be seen of men" (Matt. 23:5), and were hypocrites (ibid. 23: 13, 14, 15, etc.), because of the apparent holiness of their lives they were thought by all to be righteous, and separate from others, which is what the name Pharisee means. On the other hand, Publicans, collectors of the royal taxes, committed many injustices and extortions for filthy lucre's sake, and all held them to be sinners and unjust. It was therefore according to common opinion that the Lord Jesus in His parable signified a virtuous person by a Pharisee, and a sinner by a Publican, to teach His disciples the harm of pride and the profit of humble-mindedness.

Since the chief weapon for virtue is humility, and the greatest hindrance to it is pride, the divine Fathers have set these three weeks before the Forty-day Fast as a preparation for the spiritual struggles of virtue. This present week they have called Harbinger, since it declares that the Fast is approaching; and they set humility as the foundation for all our spiritual labors by appointing that the parable of the Publican and the Pharisee be read today, even before the Fast begins, to teach, through the vaunting of the Pharisee, that the foul smoke of self-esteem and the stench of boasting drives away the grace of the Spirit, strips man of all his virtue, and casts him into the pits of Hades; and, through the repentance and contrite prayer of the Publican, that humility confers upon the sinner forgiveness of all his wicked deeds and raises him up to the greatest heights.

All foods are allowed the week that follows this Sunday.

Nicephoros the Martyr of Antioch

This Martyr, who was from Antioch in Syria, contested during the reign of Gallienus, about the year 260. Through the working of the evil one, his friendship with a certain Christian priest named Sapricius was turned to bitter hatred. Nicephoros, repenting of his enmity, tried both through intermediaries and in person to be reconciled with Sapricius, but to no avail. Later, when the persecution broke out under Valerian and Gallienus, Sapricius was seized as a Christian. When Saint Nicephoros learned that Sapricius had been arrested by the pagans and was enduring torments for Christ, he sent intermediaries to Sapricius, begging his forgiveness; but Sapricius would not forgive him. Later, as Sapricius was being taken to beheading, Nicephoros, hoping that Sapricius, at his end, in such a holy hour, would at last forgive him, met him on the way, fell before him, and fervently asked his forgiveness; but Sapricius forgave him not. Wherefore, though Sapricius had passed through many sufferings, and the crown of martyrdom was now awaiting him, because he disdained the chief commandments of love and forgiveness, the grace of God, which had been strengthening him in his torments, departed from him, and he told his executioners he would sacrifice. Nicephoros immediately confessed Christ before them, and being himself beheaded, took the crown that Sapricius had cast away.

Should the Apodosis of the Feast of the Meeting in the Temple fall on this day the service to Saint Nicephoros is chanted on the 8th.

Resurrectional Apolytikion in the First Mode

Apolytikion for Apodosis of the Presentation in the First Mode

Seasonal Kontakion in the First Mode

First Orthros Gospel
The Reading is from Matthew 28:16-20

At that time, the eleven disciples went to Galilee, to the mountain to which Jesus had directed them. And when they saw him they worshipped him; but some doubted. And Jesus came and said to them, "All authority in heaven and on earth has been given to me. Go therefore and make disciples of all nations, baptizing them in the name of the Father and of the Son and of the Holy Spirit, teaching them to observe all that I have commanded you; and lo, I am with you always, to the close of the age. Amen."

TIMOTHY, my son, you have observed my teaching, my conduct, my aim in life, my faith, my patience, my love, my steadfastness, my persecutions, my sufferings, what befell me at Antioch, at lconion, and at Lystra, what persecutions I endured; yet from them all the Lord rescued me. Indeed all who desire to live a godly life in Christ Jesus will be persecuted, while evil men and impostors will go on from bad to worse, deceivers and deceived. But as for you, continue in what you have learned and have firmly believed, knowing from whom you learned it and how from childhood you have been acquainted with the sacred writings which are able to instruct you for salvation through faith in Christ Jesus.

Sunday of the Publican and Pharisee: Triodion Begins Today
The Reading is from Luke 18:10-14

The Lord said this parable, "Two men went up into the temple to pray, one a Pharisee and the other a tax collector. The Pharisee stood and prayed thus with himself, 'God, I thank you that I am not like other men, extortioners, unjust, adulterers, or even like this tax collector. I fast twice a week, I give tithes of all that I get.' But the tax collector, standing far off, would not even lift up his eyes to heaven, but beat his breast, saying, 'God, be merciful to me a sinner!' I tell you, this man went down to his house justified rather than the other; for everyone who exalts himself will be humbled, but he who humbles himself will be exalted."

It is possible for those who have come back again after repentance to shine with much lustre, and oftentimes more than those who have never fallen at all, I have demonstrated from the divine writings. Thus at least both the publicans and the harlots inherit the kingdom of Heaven, thus many of the last are placed before the first.
St. John Chrysostom
AN EXHORTATION TO THEODORE AFTER HIS FALL, 4th Century


When lately we made mention of the Pharisee and the publican, and hypothetically yoked two chariots out of virtue and vice; we pointed out each truth, how great is the gain of humbleness of mind, and how great the damage of pride.
St. John Chrysostom
CONCERNING LOWLINESS OF MIND., 4th Century 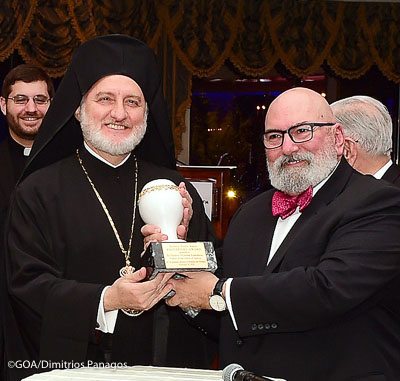 NEW YORK – The 24th Phidippides Award was bestowed last night to His Eminence Archbishop Elpidophoros of America for his passionate advocacy of Hellenism and Orthodoxy during the 33rd Anniversary Gala Dinner of the Hellenic Public Radio COSMOS FM 91.5. The event was held at Terrace on the Park in Flushing Meadows, NY. 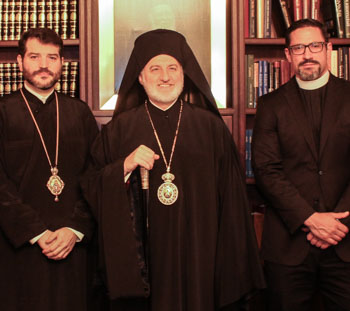 The Greek Orthodox Archdiocese of America announces the decision of His Eminence Archbishop Elpidophoros, after much consideration and in collaboration with His Eminences’ advisors, to create the following Archdiocesan Regions.

Archiepiscopal Encyclical for the Feast of St. Photios and the Saint Photios National Shrine (02/06/2020)

Beloved Brothers and Sisters in Christ, As we celebrate Saint Photios the Great, Patriarch of Constantinople, throughout our Archdiocese, we also remember our first National Shrine, named in his honor. The Saint Photios Greek Orthodox National Shrine, founded by Archbishop Iakovos of blessed memory, commemorates the first known Greeks who came to America in the 18th century, long before their distant cousins would begin arriving nearly one hundred years later.

NEW YORK – On February 12, 2020 at 7:00 p.m., the Greek Orthodox Archdiocese of America will be hosting an event focused on homelessness at the Archdiocesan Cathedral of the Holy Trinity (337 E 74th St, New York, NY 10021). The event will feature a panel, including His Grace Bishop ... 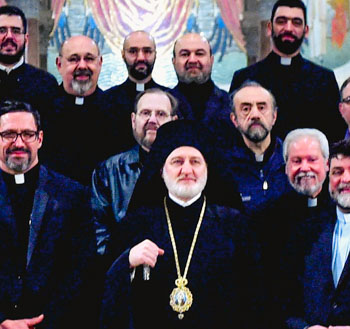