THIS WEEKEND AND NEXT WEEK...

FRIENDS OF THE METROPOLIS

Please. If you have made an online contribution to the Friends Of The Metropolis this year, please send a brief email to Harriet (Metropolis secretary) at: office@detroit.goarch.org

In your email, please note that you are a member of St. John Chrysostom Parish, Nashville.

5th Sunday of Luke
The Reading is from St. Paul's Letter to the Galatians 1:11-19

Brethren, I would have you know that the gospel which was preached by me is not man's gospel. For I did not receive it from man, nor was I taught it, but it came through a revelation of Jesus Christ. For you have heard of my former life in Judaism, how I persecuted the church of God violently and tried to destroy it; and I advanced in Judaism beyond many of my own age among my people, so extremely zealous was I for the traditions of my fathers. But when he who had set me apart before I was born, and had called me through his grace, was pleased to reveal his Son to me, in order that I might preach him among the Gentiles, I did not confer with flesh and blood, nor did I go up to Jerusalem to those who were apostles before me, but I went away into Arabia; and again I returned to Damascus. Then after three years I went up to Jerusalem to visit Cephas, and remained with him fifteen days. But I saw none of the other apostles except James the Lord's brother.

The Lord said, "There was a rich man, who was clothed in purple and fine linen and who feasted sumptuously every day. And at his gate lay a poor man named Lazaros, full of sores, who desired to be fed with what fell from the rich man's table; moreover the dogs came and licked his sores. The poor man died and was carried by the angels to Abraham's bosom. The rich man also died and was buried; and in Hades, being in torment, he lifted up his eyes, and saw Abraham far off and Lazaros in his bosom. And he called out, 'Father Abraham, have mercy upon me, and send Lazaros to dip the end of his finger in water and cool my tongue; for I am in anguish in this flame.' But Abraham said, 'Son, remember that you in your lifetime received your good things, and Lazaros in like manner evil things; but now he is comforted here, and you are in anguish. And besides all this, between us and you a great chasm has been fixed, in order that those who would pass from here to you may not be able, and none may cross from there to us.' And he said, 'Then I beg you, father, to send him to my father's house, for I have five brothers, so that he may warn them, lest they also come into this place of torment.' But Abraham said, 'They have Moses, and the prophets; let them hear them.' And he said, 'No, father Abraham; but if some one goes to them from the dead, they will repent.' He said to them, 'If they do not hear Moses and the prophets, neither will they be convinced if some one should rise from the dead.'"

By these words it is surely shown that in his [the rich man] daily feasting he had frequently sinned by his tongue, seeing that, while burning all over, he demanded to be cooled especially in his tongue. Again, that levity of conduct follows closely upon gluttony sacred authority testifies ... For the most part also edacity leads us even to lechery, because, when the belly is distended by repletion, the stings of lust are excited.
St. Gregory the Dialogist
The Book of Pastoral Rule, Chapter XIX, 6th century


The man who has once chosen pleasure in this life, and has not cured his inconsiderateness by repentance, places the land of the good beyond his own reach; for he has dug against himself the yawning impassable abyss of a necessity that nothing can break through.
St. Gregory of Nyssa 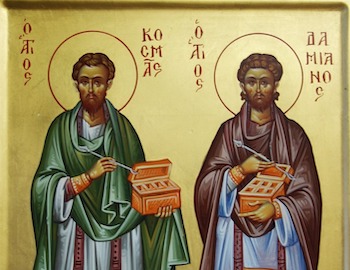 n our sacred calling to ministry, these words of our Lord speak to us in many ways. On this day when we commemorate the Holy Unmercenaries, Saints Cosmas and Damian, we reflect on the needs around us and how these two holy men offered their lives and their skills so that God might be glorified.

NEW YORK – At the October 17, 2019 Archdiocesan Council, Executive, and Finance Committee meetings, the Archdiocesan budget for 2020 was approved (2020 Adopted Budget) .