Please see our online Calendar for the schedule of Services.

Please use the following link to signup to attend services...

(If you do not signup, you will be asked to wait until room is available.)

Please ask the Usher for help to find your place for the Service.

Children are required to stay with their families during Services.

Prior to signing up, new visitors are required to contact Fr. Parthenios Turner at: stjohnnashville@gmail.com

Please be aware that we are following standard protocols to wear a mask, and allow a minimum 6' distance between individuals/families while attending services. Thank you.

In order to ensure the continuation of Services and ministry to others, it is necessary to have the financial support of members, friends, and visitors to St  John's.

For monthly budgeting purposes, it is necessary to receive yearly pledges for financial support of the Church.

We invite your support. Please email an intended weekly/monthly pledge amount to: stjohnnashville@gmail.com

Sunday of the Prodigal Son
The Reading is from St. Paul's First Letter to the Corinthians 6:12-20

Brethren, "all things are lawful for me," but not all things are helpful. "All things are lawful for me," but I will not be enslaved by anything. "Food is meant for the stomach and the stomach for food" -- and God will destroy both one and the other. The body is not meant for immorality, but for the Lord, and the Lord for the body. And God raised the Lord and will also raise us up by his power. Do you not know that your bodies are members of Christ? Shall I therefore take the members of Christ and make them members of a prostitute? Never! Do you not know that he who joins himself to a prostitute becomes one body with her? For, as it is written, "The two shall become one flesh." But he who is united to the Lord becomes one spirit with him. Shun immorality. Every other sin which a man commits is outside the body; but the immoral man sins against his own body. Do you not know that your body is a temple of the Holy Spirit within you, which you have from God? You are not your own; you were bought with a price. So glorify God in your body and in your spirit which belong to God.

Sunday of the Prodigal Son
The Reading is from Luke 15:11-32

The Lord said this parable: "There was a man who had two sons; and the younger of them said to his father, 'Father, give me the share of the property that falls to me.' And he divided his living between them. Not many days later, the younger son gathered all he had and took his journey into a far country, and there he squandered his property in loose living. And when he had spent everything, a great famine arose in that country, and he began to be in want. So he went and joined himself to one of the citizens of that country, who sent him into his fields to feed swine. And he would gladly have filled his belly with the pods that the swine ate; and no one gave him anything. But when he came to himself he said, 'How many of my father's hired servants have bread enough and to spare, but I perish here with hunger! I will arise and go to my father, and I will say to him, 'Father, I have sinned against heaven and before you; I am no longer worthy to be called your son; treat me as one of your hired servants.' And he arose and came to his father. But while he was yet at a distance, his father saw him and had compassion, and ran and embraced him and kissed him. And the son said to him, 'Father, I have sinned against heaven and before you; I am no longer worthy to be called your son.' But the father said to his servants, 'Bring quickly the best robe, and put it on him; and put a ring on his hand, and shoes on his feet; and bring the fatted calf and kill it, and let us eat and make merry; for this my son was dead, and is alive again; he was lost, and is found.' And they began to make merry. Now his elder son was in the field; and as he came and drew near to the house, he heard music and dancing. And he called one of the servants and asked what this meant. And he said to him, 'Your brother has come, and your father has killed the fatted calf, because he has received him safe and sound.' But he was angry and refused to go in. His father came out and entreated him, but he answered his father, 'Lo, these many years I have served you, and I never disobeyed your command; yet you never gave me a kid, that I might make merry with my friends. But when this son of yours came, who has devoured your living with harlots, you killed for him the fatted calf!' And he said to him, 'Son, you are always with me, and all that is mine is yours. It was fitting to make merry and be glad, for this your brother was dead, and is alive; he was lost, and is found.'"

Sunday of the Prodigal Son

Through the parable of today's Gospel, our Saviour has set forth three things for us: the condition of the sinner, the rule of repentance, and the greatness of God's compassion. The divine Fathers have put this reading the week after the parable of the Publican and Pharisee so that, seeing in the person of the Prodigal Son our own wretched condition -- inasmuch as we are sunken in sin, far from God and His Mysteries -- we might at last come to our senses and make haste to return to Him by repentance during these holy days of the Fast.

Furthermore, those who have wrought many great iniquities, and have persisted in them for a long time, oftentimes fall into despair, thinking that there can no longer be any forgiveness for them; and so being without hope, they fall every day into the same and even worse iniquities. Therefore, the divine Fathers, that they might root out the passion of despair from the hearts of such people, and rouse them to the deeds of virtue, have set the present parable at the forecourts of the Fast, to show them the surpassing goodness of God's compassion, and to teach them that there is no sin -- no matter how great it may be -- that can overcome at any time His love for man.

Archbishop Elpidophoros, Homily at the Divine Liturgy of the Publican and the Pharisee 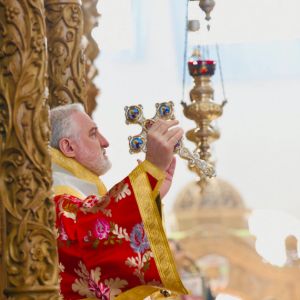 It is in a hymn of this morning’s Orthros service that for the first time this year we are introduced to the words “open to me the gates of repentance, O Giver of Life…” reminding us that we are now in the period of Triodion – the season of awareness that leads to the Great Fast of the Holy Forty Days and the Pascha of our Lord.